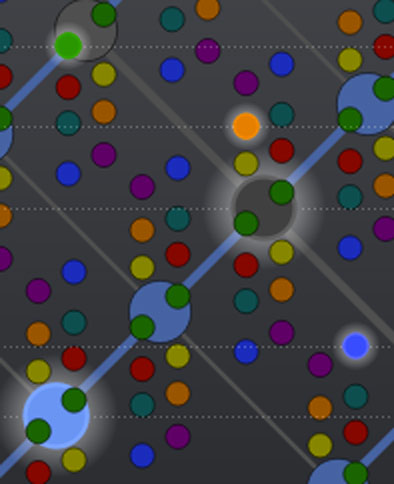 The Hayward Tuning Vine is an interface for exploring the system of microtonal tuning known as Just Intonation. It was invented by Robin Hayward in 2012, following his invention of the microtonal tuba in 2009. It enables direct and intuitive interaction with the pitches normally hidden between the keys of the piano keyboard.

Just Intonation is based ultimately on prime number relationships. In the tuning vine the prime numbers are colour-coded, allowing a clear overview of these relationships, and therefore of the musical intervals. The central 1/1 'fundamental' tone may be set to any pitch in any octave, and a shift function along each prime number axis allows unlimited exploration of all ratios up to prime number 31.

Along with this, the lattice layout allows intuitive interaction by providing an overview not just of harmonic relationships, but of melodic relationships too - the higher the pitch, the higher its position on the computer screen.

A colour-based approach to music notation

In the Hayward Tuning Vine, intervals are illustrated with colour as well as Hz, octave position, ratio, and cents deviation from tempered tuning. The software microtuner provides a Just Intonation alternative to the piano keyboard layout, and may be used for learning, performing and composing music in Just Intonation.

The demo version will time out after a few minutes, giving you the opportunity to try out the software.

This licence covers personal use of the software for commercial as well as non-commercial use, and is valid for all supported operating systems.

Academic Licence
Reduced prices based on number of orders!

This type of licence is suitable for teaching purposes. Discounts from 12% to 45% depending on number of licences ordered.

To obtain a fully working version, choose one of our licences